The viewing tower of the New Town Hall is the highest town hall tower in our country. The observation terrace is located at a height of 73 meters and the total height of the tower is 85.6 meters. The view from the terrace can be truly breathtaking. You can admire (enjoy?) the panorama of the Moravian-Silesian and Těšín Beskydy Mountains, the Moravian Gate, Oderské Vrchy and even Poland. If there is a good visibility you can also see the Hrubý Jeseník massif with the highest peak of Moravia - Praděd, as well as the peaks of Malá Fatra. Binoculars, which can bring the beauties of Ostrava and its surroundings closer to you are available for free. The viewing tower is opened daily.

The tower can be easily reached by lift. It is, therefore, one of the few viewing towers that is barrier-free. The marked barrier-free entrance is located on the right side of the main entrance of the building.

History of the New Town Hall

The construction of a new town hall building has been seriously considered since 1912. During the First World War this idea receded into the background but returned after the war with even greater urgency. Among the reasons for the construction of the new town hall, in addition to the dilapidation of the old town hall (the building of today's Ostrava Museum on Masaryk Square), was the merger of Moravian Ostrava with six surrounding villages - Přívoz, Mariánské Hory, Zábřeh, Nová Ves, Vítkovice and Hrabůvka. With this merger, the population of Moravian Ostrava increased almost threefold and its area fivefold. Another factor was the planned foundation of a county (regional) establishment with the Moravian Ostrava as its main seat. Both required area with enough space.

At meetings that addressed the issue of the location of the new town hall in 1922-1923, a plot of land in the area of the so-called “Nová střelnice” was finally chosen, although it was criticized for its location near the Ostravice River which was, at the time, already heavily polluted and smelly. In 1923, a construction program was approved and a competition for project elaboration was announced. The winner happened to be the plan of architects František Kolář and Jan Rubý. They conceived the idea as a massive two-winged building with a central part from which a viewing tower should rose. The northern wing was intended for county offices, the southern part was reserved for city offices and the center contained meeting and representation rooms. A part of the town hall complex was also a smaller residential building, intended as the mayor's apartment. Work was to begin in 1924 but the company that was chosen for the construction was labeled by competing companies as a political party. The charges were not proven but work did not begin until May 8, 1926.

During 1927, a unique, ribbed, reinforced concrete slab was planted into the foundations of the central building, serving as reinforcement, measuring 33.5 x 52.4 m. In the original variant the construction was expected to be lower (by 11 m - in comparison with final, today's version) but quite massively reinforced concrete towers. However, its external architectural form with a number of historicizing elements did not match with the whole of the town hall building which was nearly finished. Therefore, an 86 m high, steel tower was designed which was not only less costly but also had much smaller impact on the foundations of the building. The town hall was built by Ing. Artur Rozhon's company. The design of the interior equipment of the most important rooms was entrusted to the City Council by Ing. Karel Kotas. Corridors, halls and large representation rooms were lined with marble imported from quarries in Silesia, partly with mahogany and other rare wood.

The New Town Hall was inaugurated on October 28th, 1930 in occasion of a public holiday. 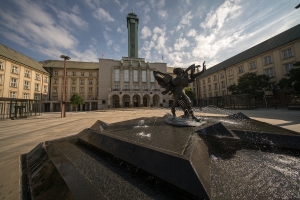